Skip to content
Animal species humans are pushing to the brink

Animal species humans are pushing to the brink

Once widespread across the eastern Australian mainland and Tasmania, these indigenous egg-laying mammals, or monotremes, have seen much of their habitat destroyed by the devastating Black Summer bushfires, which ravaged landscapes and killed an estimated three billion animals. Without trees to shade the platypuses’ preferred freshwater pools, temperatures soar, while water quality is severely impacted by bushfires, which can cause algal blooms and deoxygenation. Severe droughts and habitat fragmentation by dams have halved platypus numbers, with local populations now extinct across 40% of their range.

“Many populations are likely to have been declining for more than 50 years due to land clearing, urbanisation, changes to river flows and more,” explains Josh Griffiths, Senior Wildlife Ecologist at research organisation Cesar in Victoria. “Without strong nature laws that protect the habitats of the animals we all love, it’s only a matter of time before we see them racing towards extinction.” 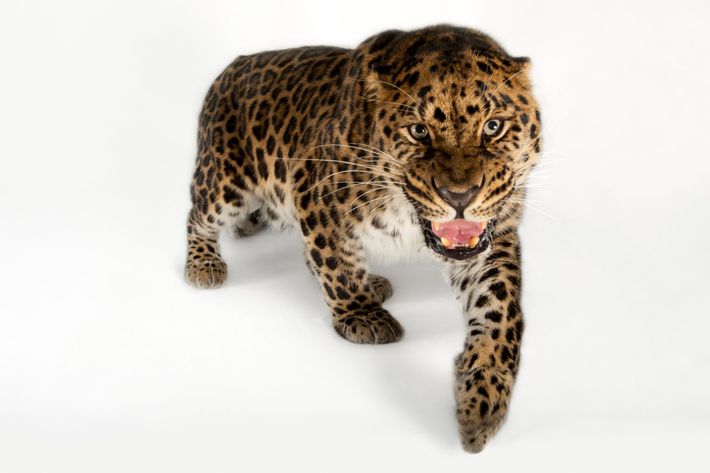 One of the United Kingdom’s rarest and most threatened bumblebees, the shrill carder bee – named after its distinctive, high-pitched buzz – is found in just five areas, two in southern England and three in south Wales. Loss and fragmentation of habitat is the key threat, with their isolated populations leaving them vulnerable to inbreeding and loss of genetic diversity. The Bumblebee Conservation Trust, working with Buglife alongside Natural England and other partners, launched the Shrill Carder Bee Conservation Strategy in July 2020 as a continuation of the Back from the Brink Shrill Carder Bee project, to protect critical wild flower and nesting habitat for the bees.

The elusive relative of the African savanna elephant, these smaller pachyderms are found in the forests of Gabon and the Democratic Republic of Congo, with populations in Central and West Africa: just one quarter of its historic range. In a 2021 review of the IUCN Red List, savanna and forest elephants were categorised as separate species for the first time, with the African forest elephant now listed as Critically Endangered. Latest estimates suggest that the population has declined by more than 80% over the last 90 years, and the trend is set to continue. “The species faces major challenges from poaching, both for ivory and the international bushmeat trade, as well as loss of habitat to agriculture and industry,” says Charlie Mayhew MBE, Chief Executive of African elephant charity, Tusk. “We welcome the re-listing of these keystone species in this critical year for conservation. As governments gather to set important new targets for tackling climate change and protecting the planet’s rapidly declining biodiversity, elephants can receive the priority they deserve.”

The Wind in the Willows favourite, Ratty, is sadly in danger of disappearing from the British countryside. “Water voles are thought to have been lost from 94% of the sites they were once found, disappearing due to development, insensitive changes to their habitat, and predation by the non-native American mink,” says Ali Morse, Water Policy Manager at The Wildlife Trusts. The Trusts’ National Water Vole Database & Mapping Project is helping conservationists to plan strategically for their return. “Trusts work to enhance rivers and wetlands, advise landowners on habitat management, campaign against detrimental development, and remove damaging mink to give voles a chance to recover,” says Morse.

This small, Critically Endangered shark was once widespread throughout the Into-Pacific, but is now so rare, some believe it could be extinct, although specimens appear from time to time in rivers and inshore waters. With fossil records dating back 400 million years, sharks are some of the oldest life forms on Earth, but but a staggering 70% of sharks and rays have disappeared from our oceans in just 50 years. Many species are now threatened with extinction due to overfishing, bycatch and demand for shark fins, considered a delicacy in Asia. Pollution, habitat degradation and climate change are also adding to the decline.“To protect these essential apex predators, governments must urgently establish vast Marine Protected Areas to cover at least 30% of the seas, and at least 10% of those should be Highly Protected no-take zones,” says Sandy Luk, Chief Executive of the Marine Conservation Society.

The Caribbean island of St Lucia is home to 2,000 native species, with 200 found nowhere else on Earth, including 76% of its reptiles. The endangered St Lucia Amazon parrot was saved from extinction through a partnership with the St Lucia Forestry Department and Durrel Wildlife Conservation Trust. which saw their numbers increase from 100 to an estimated 1,750 – 2,250 individuals. Now it’s hoped that efforts to protect the St Lucia racer, known as the world’s rarest snake, can replicate this success. Wiped out on mainland St Lucia by invasive species including rats, mongooses and opossums, just 18 of these small, harmless reptiles live on the protected nine-hectare island of Maria Major, with ambitious plans in place to expand its range.

Probably the world’s rarest big cat, an estimated 100 Amur leopards remain in the wild, their incredible rare beauty sadly making them a target for trophy hunters. Found in the forests of Russia and China, with a few animals spotted in North Korea, these apex predators remain under pressure from habitat loss and poaching for their bones, used in Asian medicine. (Video: Watch the rare Amur leopard.)

They are also vulnerable to disease including Canine Distemper Virus (CDV). With a population that plummeted to 35 individuals a few decades ago, the Amur leopard is the only big cat with international approval for a captive-bred reintroduction programme, with partners including WCS, ZSL and WWF, which offers some hope for the species.

One of the most biodiverse nations on Earth, with 86% of species found nowhere else on the planet, Australia also has the highest mammal extinction rate in the world, and over 500 native species are listed as threatened under the Environment Protection and Biodiversity Act 1999. The northern hairy-nosed wombat is one of the continent’s critically endangered mammals.

Competition for food with introduced domestic species and predation by dingoes has seen numbers plummet to just 315 individuals living in Epping Forest National Park and Richard Underwood Nature Refuge in Queensland. The Wombat Foundation funds research and conservation projects, with the aim of seeing the wombats roam once more across their former range. Love them or loathe them, arachnids play a vital role in healthy ecosystems, keeping insect populations under control, and in turn, disease. There are an estimated 45,000 species of spider  with perhaps as many yet still to be discovered but like insects, their numbers are in decline due to habitat loss, industrial farming, pesticides and the spread of monoculture crops. Found in just one small area of forest in India’s Andhra Pradesh, this brilliant blue tarantula lives in crevices in tall, old-growth trees, but logging and habitat degradation in its home range, along with trapping for the international pet trade, has led to the IUCN listing the spider as Critically Endangered. (Read: new species of tarantula found with weird ‘horn’ on its back.)

Living in eight fragmented patches of forest in Tanzania, the Rondo dwarf galago is one of the world’s rarest primates. Weighing just 60g with a distinctive call and ‘bottle-brush’ tail, these insect-eating tree-dwellers are under threat from deforestation and habitat degradation. The ZSL (Zoological Society London) EDGE of Existence Programme is the only global conservation initiative to focus specifically on threatened species that have few close relatives on the tree of life. “EDGE prioritises unique species that are at high risk of extinction, and have had low conservation attention to date,” says EDGE Programme Manger, Olivia Couchman. “If we lose Critically Endangered species like the Rondo dwarf galago, Chinese pangolin, Seychelles palm frog and Attenborough’s long-beaked echidna, we stand to lose many millions of years of evolutionary history.”

Once abundant in the seas surrounding the British Isles, the flapper skate – a large flat fish, growing up to three metres in length and related to sharks and rays – is now a critically endangered species. Historically overfished, the skate remains under pressure from bycatch, dredging and habitat destruction, so protecting its foraging and nursery grounds is crucial to the survival of the species. In 2019, National Geographic Explorer-in-Residence, marine biologist and founder of Mission Blue, Dr. Sylvia Earle, established the Argyll Coast and Islands Hope Spot – the first in mainland U.K. – to protect the little-known but largest of all the world’s skates, calling it “more endangered than the giant pandas”.

“Known locally as Angonoky, the largest of Madagascar’s five endemic species of tortoise is in the unenviable position of being both extremely rare and highly threatened,” says WWF’s Africa Region Director, Alice Ruhweza. With numbers reduced to around 100 adults by locals hunting them for meat and capture for the exotic pet trade – they have been known to fetch $50,000 on the black market – Baly Bay National Park is their last stronghold. “But there is hope,” says Alice. “We must work together to broaden global awareness of the illegal trade in endangered species for pets, and encourage governments to strengthen laws to bring this beautiful tortoise back from the brink.”

Considered ‘living dinosaurs’, birds have inhabited the planet for around 100 million years, but today, over 1,480 of the 10,000 known bird species are considered globally threatened, and 223 are Critically Endangered. In Europe, one in five bird species are now threatened with extinction, while seabird populations are suffering due to longline fishing and marine pollution. But it is Asia’s bird species which have seen the sharpest decline because of rampant deforestation. Once widespread, fewer than 200 great Indian bustards remain, found mostly in the Thar Desert. “These birds face a multitude of threats including habitat loss and degradation, power line collisions, hunting, predation by dogs and foxes and direct disturbance,” explains Stuart Butchart, Chief Scientist at BirdLife International. An indicator species, when birds are in danger, we’re all in danger, too.

The largest predator in South America sadly hasn’t proven to be a match for the human hunters that have driven the species towards extinction. Of the 24 known species of crocodilians, the Orinoco crocodile is one of seven listed as Critically Endangered on the IUCN Red List, with four other species listed as vulnerable. (Related: behind the scenes of a close crocodile encounter.)

Found in the Orinoco River and its tributaries in Venezuela and Colombia, the crocodile – which can measure over five metres in length – was hunted almost to extinction for its skin. Despite legal protections being introduced in the late 1960s, fewer than 250 remain in the wild today, but it’s hoped that captive breeding and reintroduction programmes will help the population recover.

Discovered in the Solomon Islands, a remote archipelago in the South Pacific Ocean to the northeast of Australia, this large arboreal rodent was first documented in 2015 by researchers from the Chicago Field Museum, but is already Critically Endangered. “The vika, as it’s known locally, is only found in one unlogged forest on the island of Vangunu,” Re:wild’s Senior Director of Conservation Strategies, Barney Long, told National Geographic. “And sadly that forest is slated to be logged, which could spell extinction.” Hope for the vika lies with the people of Zaira, a small community demanding protection for the forest and taking a stand against logging and mining. “The rivers, streams and seas are all polluted and the companies are operating for just one, three or five years, and then they leave,” community leader, Hanz Jinohe, told ABC News. “We are so dependent on the natural resources in the sea and the forest for our continuous sustainment. The people are in so much trouble. We have seen it with our own eyes.”