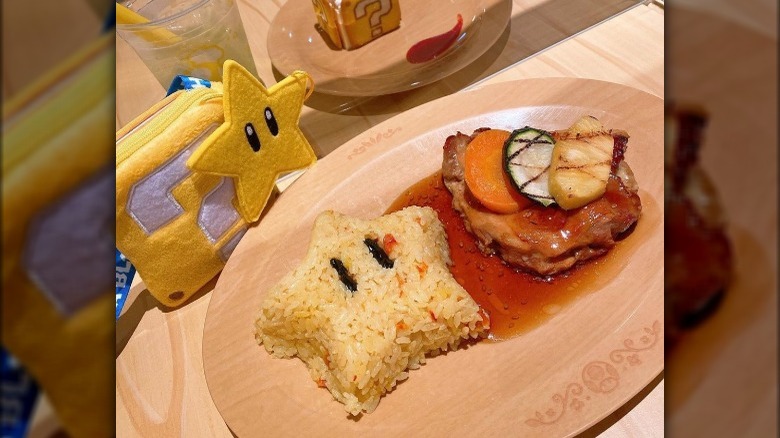 Another entree you can order at Kinopio’s Cafe in Super Nintendo World is the Teriyaki Chicken and Super Star Rice. This dish comes with a serving of chicken with a teriyaki glaze as well as a side of yellow rice molded in the shape of a Super Star (via Mario Wiki). It is a simple yet effective dish in that the food itself is a standard chicken and rice meal, but it is presented in a way that makes it fun and themed perfectly to the land.

TDR Explorer noted in his visit to Super Nintendo World that the dish tastes exactly as you would expect with no surprises. This is good to know if you happen to visit the land at Universal Studios Japan and are looking for a dish that you know you will enjoy: If you are a fan of chicken teriyaki, then you will probably dig this dish. 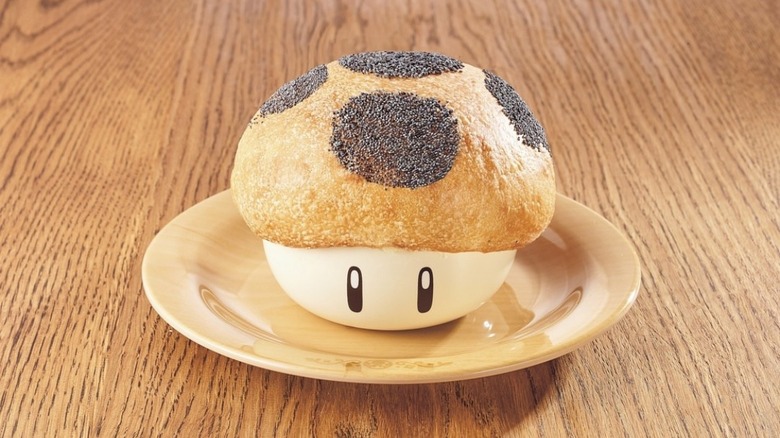 A dish that is unique both in its flavors and its presentation is the Super Mushroom Pizza Bowl with Mushroom Tomato Sauce. Sticking right with the mushroom theme of the menu found at Kinopio’s Cafe, the pizza bowl not only comes with a ton of mushroom flavor, but the bowl itself is in the shape of a Mario-esque mushroom. The ‘crust’ of this pizza bowl is the mushroom hat, which comes off to reveal the remaining ingredients found in the bowl (via Mario Wiki). You can pierce it with your spoon and mix it into the pizza bowl, or you can simply remove it and use the pizza hat as something to dip in the bowl.

The pizza bowl was a standout menu item for TDR Explorer in his roundup of food items ordered from Kinopio’s Cafe. This pizza bowl is something to keep your eyes peeled for if you visit Universal Studios Japan; otherwise, be on the lookout to see if it makes it to Universal Studios Hollywood. 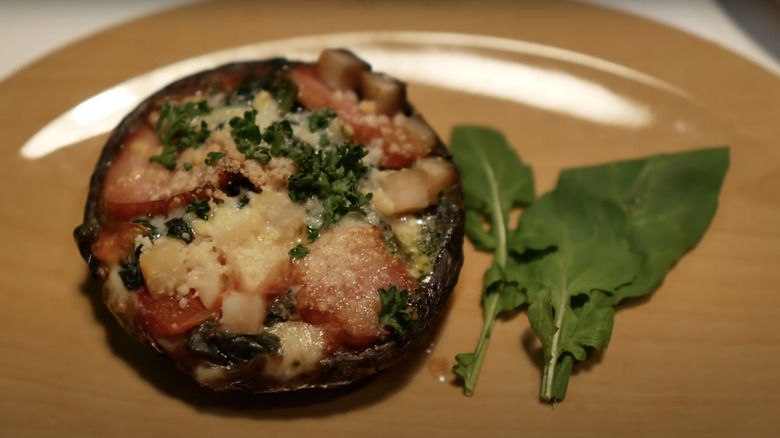 Mushroom fans will have no problem finding dishes that suit their taste at Super Nintendo World. Kinopio’s Cafe seems to be well stocked with mushroom-inspired dishes, and the Portobello Mushroom Pizza Topped with Bacon and Vegetables is no exception. In fact, this is not your standard pizza topped with mushrooms — this time, the mushroom itself is the pizza, with the portobello mushroom serving as the base which is then topped with bacon and veggies (via Mario Wiki). This is a rare opportunity to eat plenty of veggies while visiting a theme park, a place that is typically known for deep-fried snacks and all things sugar.

Needless to say, this is a dish built with a mushroom fan in mind. While something as unique as this would be a great addition to Super Nintendo World at Universal Studios Hollywood, we wouldn’t be surprised if we also saw a traditional pizza topped with mushrooms being added to the menu when the land opens in the U.S. 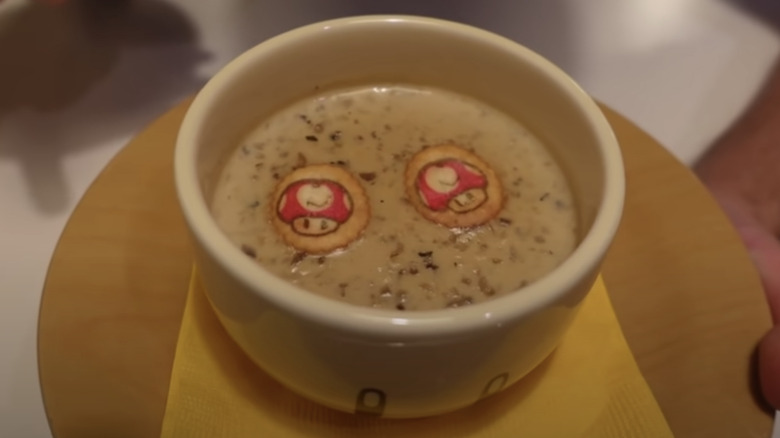 Soup may not be the first thing you think of when you imagine a theme park snack, especially if you are visiting on a hot day. But if you happen to visit during the winter months, a serving of Mushroom Soup may be just what you need to keep yourself warm and cozy while visiting Super Nintendo World. This Mushroom Soup comes in a bowl in the shape of one of the mushrooms from the Mario video games, with a removable hat that keeps the soup nice and warm. The soup itself is a traditional mushroom soup, but it does come with Super Mushroom-shaped wafers to add that extra Mario touch (via Mario Wiki).

Kinopio’s Cafe at Universal Studios Japan has tons of mushroom-forward dishes, so keep that in mind when you are choosing where to eat during your visit. TDR Explorer does point out in a YouTube video that it has a strong mushroom flavor, so if that is not your cup of tea, you may want to steer clear of this dish. 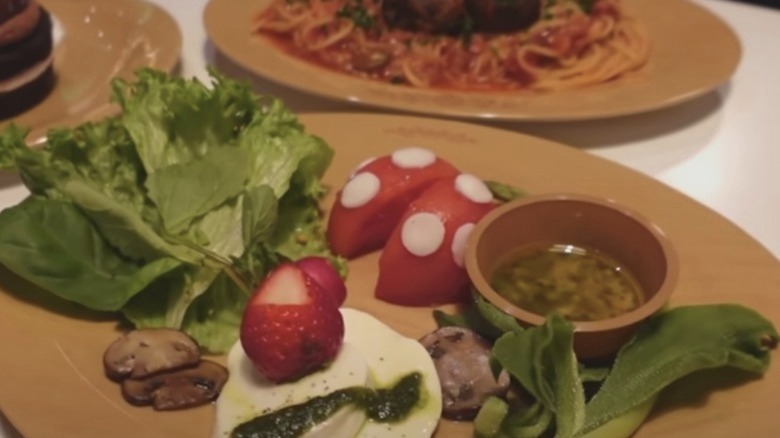 Many of the dishes found at Kinopio’s Cafe are on the heavier side, with rich mushroom flavors in items like soups, pasta, burgers, and more. If you are craving something that’s on the lighter side, the cafe does offer a salad option called Piranha Plant Caprese. This caprese salad comes with lettuce, tomatoes, mushrooms, strawberries, mozzarella cheese, and dressing. Two of the tomatoes are arranged in a way that makes them resemble a Piranha Plant you may recognize from the Mario video games (via Mario Wiki). According to TDR Explorer, this is one of the few vegetarian dishes available at Kinopio’s Cafe, with the other two being the Mushroom Soup and the Fruit and Veggie Salad.

Arranging your salad to be in the shape of a video game character is one way to get little ones to eat their vegetables, but adults will probably enjoy the creative plating just as much. It is a fun way to enjoy food specifically themed to Super Nintendo World without the side of guilt that seems to come with many carb-heavy theme park snacks. 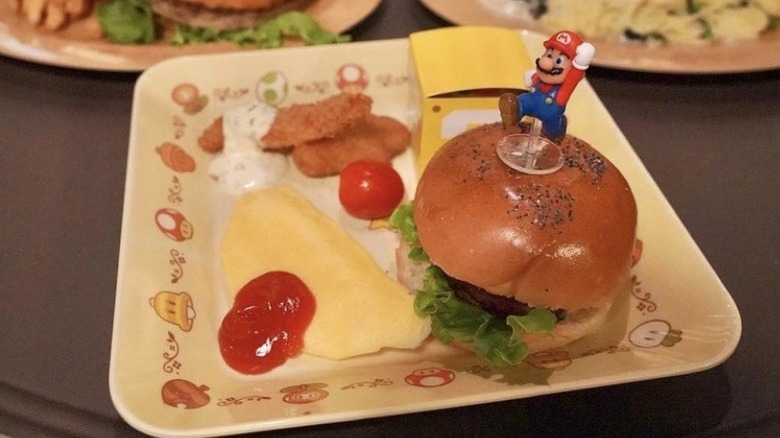 Kids have a couple of meal options to choose from in Super Nintendo World at Universal Studios Japan. One is a curry and rice dish, and the other is the Kids Hamburger meal with a Mario Figurine. This is one of the meal options we would not be surprised to see arrive at Super Nintendo World in Hollywood or Orlando, since hamburgers are a pretty common theme park meal.

What makes this kids meal unique in Japan is that it comes with a teriyaki burger instead of a plain burger, with a variety of side dishes including an omelet, fried shrimp, a croquette in the shape of a Super Star, tomatoes, and a dessert (via Mario Wiki). If this kids meal comes to the U.S., it is possible it will be modified slightly to more closely resemble a traditional hamburger with french fries. But what we hope stays is the cute Mario figurine that comes on top of the burger that kids can keep as a souvenir. 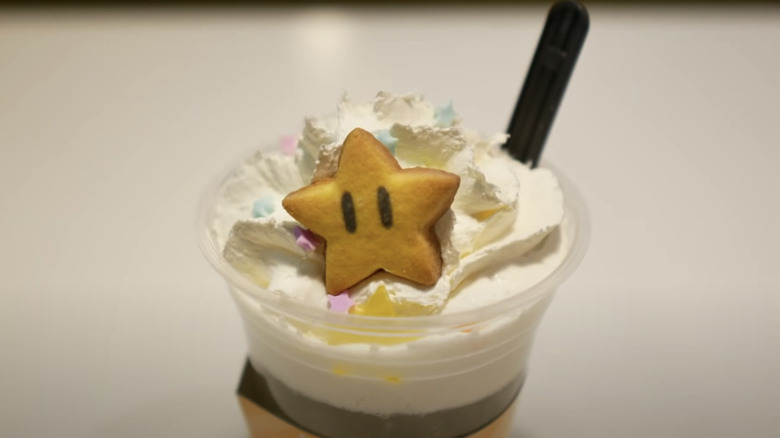 There are a couple of drink options at Kopino’s Cafe in Super Nintendo World. One is the Super Star Hot Yuzu Lemonade, which is made with yuzu, a kind of citrus found in Japan, and served with whipped cream (via Mario Wiki). The lemonade also comes with star-shaped sprinkles, including one large Super Star embellishment. The drink is a fun addition to your meal, or it can serve as a standalone snack if you are just looking for something cute to sip on. The hot drink cups even come with a Super Star and Toad-themed sleeve.

Also available at Kinopio’s Cafe is the ​​Super Star Lemon Squash, a carbonated beverage with gummy stars (via TDR Explorer). A hot yuzu beverage will come in handy if you are visiting Universal Studios Japan on a cooler day, or if the temperatures drop in the evening and you want something to warm you up. 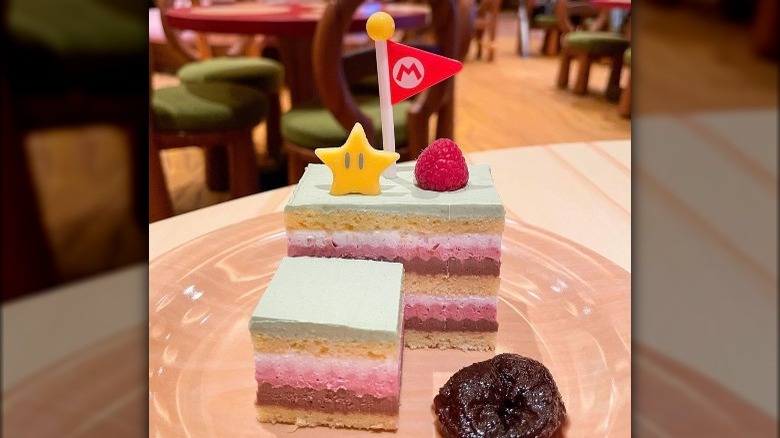 If you have a sweet tooth and you want to pick up a dessert during your trip to Super Nintendo World, keep your eyes peeled for the Goal Pole Cake. Found in Kinopio’s Cafe, it is a slice of layered neapolitan cake topped with the iconic Goal Pole from the Mario video games, as well as a Super Star and a raspberry (via Mario Wiki). Just like Mario reaching the Goal Pole at the end of a level, you too can reach your very own Goal Pole at the end of your meal.

Additionally, Kinopio’s Cafe serves a Block Tiramisu Cake, a Double Cherry Chocolate Cupcake, and Princess Peach’s Cake for desserts (via TDR Explorer). Sweet treats are great theme park snacks since they are great for kids, so we are sure to see at least a few different dessert options at Universal Studios Hollywood and Universal Orlando Resort.