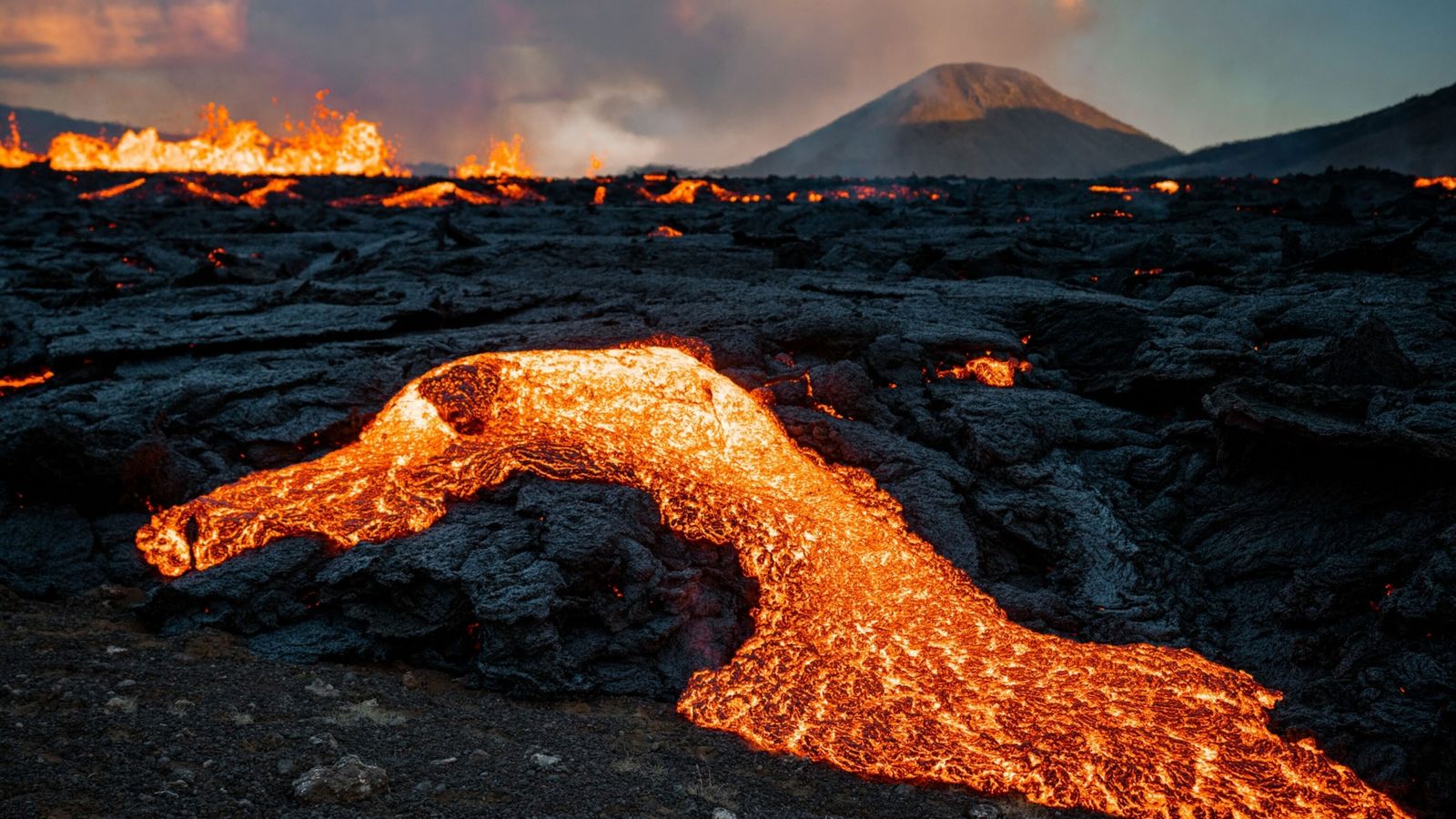 Last week, Eniko Bali was settling down to eat lunch within one of Iceland’s many ancient volcanic craters, as geologists do, when she got a text. The Reykjanes peninsula was erupting, again.

The geologist at the University of Iceland and her team were planning to sample rock from some of the island’s many historic eruptions. But with fresh fiery fury underway, Bali and her colleagues went to see the geologic show. When they arrived, just a couple of hours after the eruption began, a long line of fountains were shooting incandescent lava into the sky, and radiant rivers of molten rock were snaking through Meradalir valley. 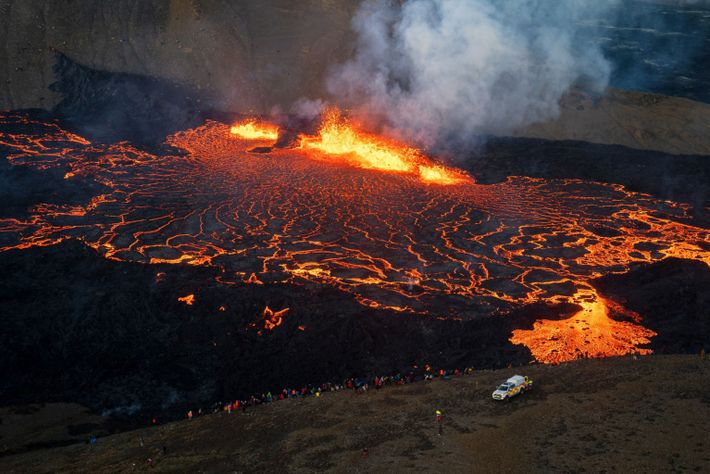 Tourists flock to see the newly erupted lava on the Reykjanes peninsula. While this eruption can be watched from a safe distance, experts caution against approaching too close and suggest using a gas mask to limit exposure to toxic volcanic fumes.

The volcanoes of the Reykjanes peninsula had slumbered for nearly 800 years. But in 2021 the geological giants stirred, spewing lava for six months. Now the ruckus has started again.

Each of these events gives researchers a remarkable look deep into our planet’s innards and offers clues to what shaped the stunning Icelandic landscape we see today. Last year’s eruption started with quizzical chemistry: the melted rock seemed to have changed little since its formation, sprinting to the surface straight from the mantle—a layer miles underground that’s sandwiched between Earth’s crust and core. Then the chemistry of the lava dramatically changed.

“We didn’t expect that to be honest,” Bali says. “There is something very interesting happening.”

The first analyses from the new eruption reveal a composition that’s similar, but not an exact match, to the lavas that flowed near the end of the unrest in 2021. Scientists are avidly collecting more samples to see if other strange shifts are in store.

The quirks of the Reykjanes lavas are just the latest chapter in Iceland’s long history of geological oddities. How the island formed at all has posed an enduring mystery. It sits at the juncture of two powerful phenomena: a ridge where two tectonic plates are pulling apart and the point at which a plume of searing hot rock meets the surface. When these forces joined some 25 million years ago, supercharged eruptions laid Iceland’s foundations. Yet the story is far from complete.

The second eruption on the Reykjanes in less than a year suggests this long-slumbering volcanic peninsula may be reawakening. Eruptions in this region seem to rev up every thousand years or so, and the latest rumbles may be a prelude to volcanic activity—and scientific opportunities—for decades to come.

Magma from the source

Iceland is one of the only places in the world where the mid-ocean ridge pokes above the sea. This roughly 40,000-mile-long string of volcanic peaks traces the rifts between slowly spreading tectonic plates around the world. In Iceland, the North American and Eurasian plates slowly draw away from each other, which sends molten rock welling up from below to erupt at the planet’s surface.

But the tectonic plates don’t pull apart in a single straight line, instead forming a series of offset segments strung together by zones that slide side-by-side. The Reykjanes sits atop one of these complex connectors where the land is tugged at an angle, which causes cracks to open periodically allowing magma to seep through, a feature known as a “leaky transform fault.”

In most volcanic systems, molten rock forms in small zones deep in the mantle, slowly trickling upward, coalescing, and mixing with other melted rock that collects in long strings of tiered reservoirs. But in a leaky transform fault, as seen in the Reykjanes, the erupted lavas don’t all trickle through this same kind of volcanic plumbing, which means their compositions have changed less since their formation underground.

“We get to tap into this part of the Earth that’s rarely seen,” says Edward Marshall, a geochemist at the University of Iceland.

Scientists watched as the lava chemistry in Reykjanes drastically changed within the first few weeks of the 2021 eruption—the fastest such shift ever seen, Marshall says. The phenomenon likely comes from the magma intermingling with a second source, but the composition of that source is unknown, Marshall says. “Whatever it is, it’s weird.”

Analysis from another team of researchers suggests a third magma might also be involved, further complicating the picture.

The chemistry of eruptions throughout Iceland’s history betrays fiery roots that extend far below the spread of the mid-ocean ridge. One strange signature comes from a light isotope of helium called He-3, which is abundant in Iceland’s eruptions.

The vast majority of this isotope in Earth’s rocks was trapped as the planet formed from a cloud of debris around the infant sun. A reservoir of He-3 likely still lingers deep in the mantle. Such a source could explain the chemistry of Iceland’s lavas, drawn up to the surface in the rising plume of searing hot rock, which may reach nearly to the planet’s core.

Rocks off Greenland’s coast suggest that when this plume formed some 60 million years ago, it broiled Greenland’s underbelly. And as Earth’s tectonic plates shifted, so too did the mid-ocean ridge, until it snaked its way above the plume some 25 million years ago. Soon after the two powerful geological forces met, Iceland was born.

Yet scientists are still trying to fill in the details about how this geologic juncture formed and the lingering oddities of Icelandic lava. A scientific argument has raged for almost half a century over another chemical signature: the oxygen isotope O-18. Iceland’s erupted lavas are mysteriously depleted in O-18, but scientists still don’t know why.

Some researchers argue that, as the Icelandic lavas squish upward toward an eruption, they’re contaminated by the crust, which often has a low O-18 fingerprint. Others have proposed that the chemistry comes from a sliver of Greenland lodged beneath southeast Iceland. Still others argue the mantle in this region may just have a low O-18 signature.

“You don’t see this at other ocean islands. It’s just Iceland,” Marshall says. “Why is Iceland special?”

To search for answers, Maja Bar Rasmussen, a geochemist at the University of Copenhagen, and her team turned to tiny green crystals of the mineral olivine. These crystals form early as magma cools, potentially trapping a snapshot of the molten rock’s chemistry without contamination from the crust at the surface. The team measured oxygen isotopes in olivine crystals from historic eruptions across Iceland. Along with prior helium isotope measurements of the same crystals, the work revealed that the erupted rocks not only originated from deep underground but also already bore traces of crust-like oxygen signatures.

Perhaps, the study authors posit, the plume is tapping into a graveyard of ancient fragments of crust that were subducted long ago and settled near the base of the mantle.

While past studies have suggested similar scenarios, the detailed work in the new study allowed researchers to identify an intriguing correlation. Some 25 million years ago, when scientists think the mid-ocean ridge shifted atop the plume, the chemical traces of recycled crust increased. Could this chemical change be related to the increased volcanic activity that built the island’s base? Or is the timing mere coincidence?

“We cannot say which one caused what,” Rasmussen says, adding that the coincidence turns the gears in her mind.

The debate over Iceland’s peculiarly low O-18 lavas will likely continue. Scientists don’t have a good way to measure precisely how deep the olivine crystals formed, which leaves uncertainty about the origin of their chemical fingerprints, says Valentin Troll, a geochemist at Uppsala University in Sweden. “The big question is, when is this material being incorporated into the plume?” he says.

Researchers also don’t know exactly what happens to ancient chunks of the planet’s surface once they’re recycled into the mantle—or the dynamics of rocks near the boundary with the core. “There may be some wild mixing process that makes everything more complicated,” Marshall says.

Yet one thing is sure, something intriguing is happening beneath Iceland. The latest eruption has drawn scientists from near and far to collect rocks mere hours or days after they surge from the Earth. And there are no signs that the eruption will stop anytime soon, as molten rock continues to fountain, building up a small volcanic cone of spatter.

Even after this volcano’s last gasp, the awakening Reykjanes may have more eruptions brewing deep underground—each one dredging up crimson streams of incandescent rock with the promise of more scientific oddities from below.